Many of you may have been hearing about some recent violence in Tijuana, Mexico. For a decade or more, strife between the drug cartels and Mexican government has been rather quiet in TJ. Unfortunately, the reason behind that, is because the cartels were mostly in control. The recent stir is due to a greater presence of Mexican military, ordered by Mexico City, attempting to flush out corruption. Some recent arrests of high-level cartel leaders, have caused some of the retaliation of arsons and shootings, causing citizens of Tijuana to hunker down in their homes to remain safe. We have not been back across the border since this situation began, until we are assured it is under control and safe again. All of our colleagues, friends and families are safe. They report that the streets have been even eerily quiet. Very unusual in this densely populated city. These battles between cartel and government have continued strongly in other areas of Mexico over the years. It was only a matter of time before the shift to Tijuana, Mexico’s 2nd largest city and border-town, would also be challenged.

A local NPR article quoted “The drug cartels had flexed their power in Tijuana in a way not seen for more than a decade and reignited fear and debate over who is it that really wields influence in the country: the government or the gangs.” Read the full article at this link.

We had already been seeing more Mexican National Guard at customs, while declaring our trucks of food. This process has become a hassle once again, as a new administrator overseeing declarations is requiring different paperwork, and the usual red tape to acquire. Of course, both of these matters could use some prayer for our work in Tijuana to continue as it has been, for 15 straight years now. We continue to provide funds to our partners there for food, transport costs, and school sponsorships, as we administrate from this side of the border.

The last time we crossed the border, we took in cases of Spanish/English Bibles. A young couple we had been connected to through some hardship circumstances of their own, expressed a desire to reach out to the community where they live now, in Ensenada, Mexico. They desire to visit their neighbors, share their testimony in the Lord, but also wish to gift them with a Bible. They explained to me that they felt it was important to give a Bible that had both English and Spanish, as many they have met, desire to learn English. What better a way than to have them read Scripture, while studying a second language! We wanted to honor this important mission, and quickly purchased Bibles in bulk. I researched the best price as the dual language increases the average cost from $3 each to $10 each. If you would like to sponsor the purchase of more Bibles let us know. Perhaps you could even send a little encouraging message that we can translate and deliver, with the Bible. It is always a blessing to have a personal touch from someone they may never meet. And I assure you, that you, too will be blessed.

Also this past month we joined some friends, and remembered the late Keith Green who, 40 years ago, went to heaven with his 2 small children in a devastating plane crash. If you do not know about Keith & Melody Green, please enrich yourself with a quick google of their names. Decades of ministering to the lost through their ministry, Last Days Ministries, which we serve as board members. Melody has become a very special friend of ours the past 17 years. She has long continued to carry the torch they first started 46 years ago, for the poor, the lost, and the Body of Christ. A special remembrance service was held, where fans from all over the world either joined in person, or live stream, as we worshiped, shared stories, testimonies and the challenge for continuing to win the lost.

Wayne moderated the live stream chat as 700 others joined in, sharing their own stories of how LDM had introduced Jesus to them, and how they are serving the Lord now. It was a real honor to hear testimony after testimony. The Lord is faithful!

We appreciate your continued prayers for our health and our families’ health, as challenges continue. Also Carol is traveling to South Dakota September 29 – October 3 for a worship and prayer initiative on Sisseton-Wahpeton Reservation. Stay tuned for that trips report. Love Wayne & Carol 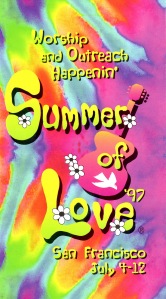 20 years ago, Carol, myself, Mark, and Gary from our church leadership staff, took a team to San Francisco to celebrate 30 years since the Summer of Love – a revolution of peace and love that emerged in the late 60’s.  A counterculture arose amidst this revolution, but so did the Jesus movement, one of the greatest ingathering of souls for the Kingdom of God in

that generation.  As I read over our newsletter from that July 1997, I was reminded of all the amazing opportunities we had to do worship and evangelism all over the city. Many people were reached and ministered to. What an amazing opportunity for the Lord, and what great memories for us!

Fast forward 20 years, and another event is being organized to celebrate-now-50 years, since the Summer of Love outpouring. Our friend Melody Green, asked Wayne to come

and assist her, as she ministers at the event. She and her husband Keith, were among those who came to know the Lord through the birthing of the Jesus movement. They were also among the ones who took the reins, and continued leading others to the Lord through that revival movement. Her voice is valued for this milestone. We will be doing outreach in the parks again, and look forward to sharing our encounters with you. If you are curious in reading more about the event you can do so at www.thesound2017.com   Prayers appreciated July 5-9th. 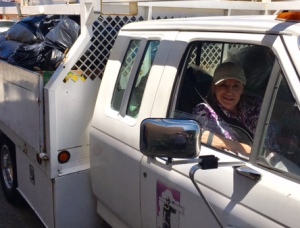 We had a great visit with Melody last month. She has a wealth of wisdom and years of experience that is very inspiring. We are not beginners, after 21 years of full time ministry, but we recognize one who has given her entire life to the Lord and His service. I have often shared how much Keith Green’s music inspires my work with the poor. And how listening to it regularly, helps me stay on track.   One of my favorite things to do is drive around Tijuana, connecting with the faces and surroundings, while listening to Keith’s song;

On this occasion, I got to drive around with the actual writer of the song! Melody rode jump seat with me, to deliver food to the orphanage one day. What a treat. She loved it and took some great photos of the kids helping me unload the truck. And of course we enjoyed some delicious tacos!