We dedicate this months newsletter in memory of our friend Ramon Escamilla.  He was separated by his family in the US for years due to deportation. But he quickly became part of our ministry family. He was our translator, mechanic advisor, and most of all, our good friend. He is and will be greatly missed!

Hello everyone, this is Gabriel Fajardo. I am excited to have the privilege to write this month’s VOB Newsletter. Working for Wayne and Carol has taught me so much over the last year, and I would like to share with you some of my experiences that I’ve had.

First I must say that Wayne is an amazing man of God, and I am so fortunate to be able to work alongside him. His dedication and heart for the people of Tijuana, has inspired and encouraged me to strive for more, and grow in my walk with God. Watching him serve has taught me to be selfless, committed, and joyous in the midst of struggles. I’m sure you know that we have been facing a lot of resistance with Mexican customs, and through it all, Wayne and Carol have trusted and known that God would provide a way for us to continue the mission, and He has. My faith has grown so much from seeing the miracles that He works every time we go to Tijuana. It is incredible. As a matter of fact, just last Friday, the 17th, we were told that we could no longer cross through the East Otay Border with donations. We would have to travel west to the San Ysidro crossing and then back east where we meet our partners. It seemed like another swing at us because of all the extra driving and traffic, but we managed to get the import fee back to 100 pesos again. Praise God! That’s a quarter of what we’ve been paying the last six months. And hopefully it will stay that way. Many people would have given up or gotten discouraged, maybe even felt like God wasn’t there. But not Wayne! He simply trusted that God had it under control.

In January of 2015, I went to Mexico for the first time in my life to do ministry work with some guys (Wayne & Greg) I met through my buddies at church. They told me they go to Mexico to serve the poor, and asked if I wanted to go. I thought of all the hassles and dangers there could be, and what might happen to me and I didn’t really want to go.

But when I got there I was greeted by some of the nicest people I’ve ever met. Vicente and his family, whom you’ve heard so much about, were so kind. I immediately forgot about all my worries. We met some families in a neighborhood called “Buenavista” (good view), and we gave them a basketful of bread, fruits, and veggies. They were so thankful and happy. I felt like I was actually serving the Lord and doing His will. Then I got to “Postal”, the neighborhood where we pass out bread and fruit to about 200 people. I was blown away that all these people were lined up at 10 o’clock at night, waiting for a bag of bread. I had never seen such a thing. They were just waiting patiently, not fussing or getting angry. We gave everyone a bag and filled it, one after the other. It was amazing to see all these people with smiling faces. I was able to pray for some people that were waiting in line. One guy I remember very well. His name was Ricardo. I prayed for him that night and every Tuesday for a couple months afterwards. 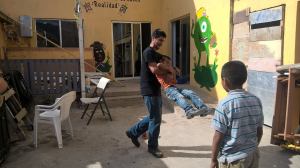 Some of the people there I have known now for a year and a half. A woman named Carolina, is there every Tuesday so she can take food home to her son, daughter and granddaughter. Her husband took his own life a couple years ago, due to hardships, so it is up to her to provide for her family. There are always lots of little kids waiting for some food. They love to play soccer, or get on my shoulders and have me spin them around until they get dizzy. I tell them to listen to their parents, and do well in school. Giving them a piece of chocolate, is like giving them an Xbox! They get so ecstatic.

There are also many men who work hard for twelve hours, and get paid what we make in one hour, then they come to our outreach because they need the food to make it through the week. I shake their hand and humbly welcome them, because I can see in their eyes the hardships they live through.

This ministry has changed so many peoples lives, including mine. I truly believe that we are getting a little closer to God every day, because of the miracles He works through Wayne and Carol. It comforts me that these people, all children of God, go to bed with a little more in their bellies because of what we get to do as the hands of Jesus.

I pray in my heart that we are making a difference in these peoples’ lives. I pray that they know how much Yahweh loves them, and that He sent His son to die for us on that cross. I pray that their lives are transformed to proclaim the glory of God, and all His goodness.

Gabriel has been on staff with VOB for nearly a year and was volunteering for several months before that. He assists Wayne daily with food pick ups and deliveries to Mexico. He also runs the whole operation when Wayne is able to get away for some needed R&R. We are so  grateful and delighted with his amazing contribution to the VOB team. Your generous monthly support helps make that possible.  Thank you!